Frank Edward Dodge (1877-1918) ventured into drum manufacturing around 1903 after buying out William J. Blair (1845-1916) formerly of Boston's own Blair & Baldwin. By 1904 the F. E. Dodge Company was incorporated under Massachusetts law with a capital of $50,000 and was located at 3 Appleton Street where the company would remain until they were succeeded by Nokes & Nicolai in 1912. The drum featured here is a fine example of the Dodge company's later work dating from about 1908 - 1912. 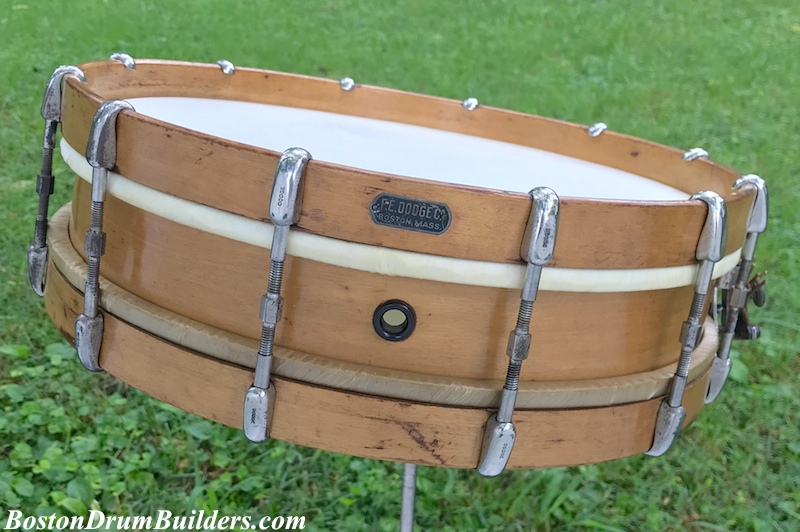 Dodge's drums evolved quickly over the the company's brief lifespan. The most innovative aspect of their later drums is the use of self aligning swivel nuts housed inside hollow steel claws. This design is conspicuously absent from the 1907 F. E. Dodge Company catalog suggesting this particular example was built after that time.


The throw-off mechanism seen here is Dodge's own design. Though it closely resembles William F. McIntosh's mechanism, Dodge's "Combined Snare Strainer and Muffler" is distinct in that it is formed from stamped steel rather than cast brass. Also, Dodge's mechanism bridges over the snare gates cut into the bottom counterhoop whereas McIntosh's mounts below the cutout. Wording stamped into this example indicates that Dodge applied for a patent of his design though it appears to have never come to fruition as no records of a patent having been granted can be found, and later examples lack any stamp referencing a patent at all.


The tensioning system implemented here is what Dodge, and later Nokes & Nicolai, described as "double tension". While this is arguably an advancement over the older thumbscrew style, it still yielded a drum which was effectively 'single tension' in that the two heads could not be tuned independently. This particular drum is formed around a shallow, one-ply maple shell which is reinforced inside by thin rings at each bearing edge.


Overall, this is a well preserved example of a roughly 110 year old snare drum. The original shellac finish and nickel plated hardware are in good condition and needed only a gentle cleaning and hand polishing to bring back a nice sheen while preserving enough patina to let the age show through. New calfskins tucked onto the existing, and possibly original, flesh hoops completed this soft restoration.

Do you have an drum made by the F. E. Dodge Company? I would love to see it! Feel free to send Lee an email anytime at lee@vinson.net. And for more on the early 20th century drum makers of Boston, Massachusetts, please visit BostonDrumBuilders.com.