Boston's George B. Stone & Son manufactured hundreds of "Separate Tension Drums" during the 1910s and 1920s. Not all examples can be precisely dated, but there are several defining characteristics of these instruments which evolved over time making it possible to approximate the age of many drums. 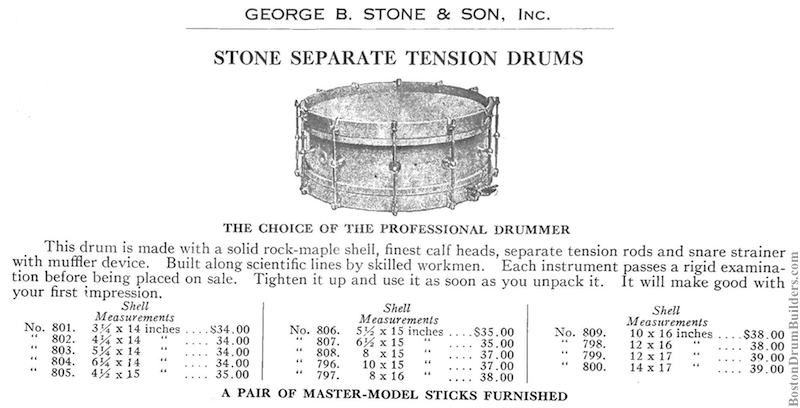 The overwhelming majority of Stone & Son's Separate Tension Drums were formed around maple shells. Exceptions do exist, however, and catalogs from the early 1910s offer walnut and mahgony for an additional price. Before 1922, the Separate Tension Drums were built from thin, single-ply shells with solid maple reinforcing rings at the outer edges as well as underneath each row of tube lug posts. Depending on shell depth and the number of tube lug posts, drums typically had a total of three or four reinfocing rings.

Geo. B. Stone & Son commonly lined each drum's air vent with a grommet. Before 1924 these grommets were always formed from wood. Grommets found on drums built in the early and mid 1910s are sometimes formed from lighter colored woods and can be bulkier in appearance. Wooden grommets used during late 1910s and early 1920s were commonly made from highly polished rosewood and often have a thinner outerfacing lip. Sometime in 1924, Stone began installing ridged, black synthetic grommets which screwed into a threaded vent hole. These threaded grommets remained in use on Stone & Son's higher end drums, including the Separate Tension models, for the rest of the company's existence.

Stone & Son began applying badges to their drums sometime in the early to mid 1910s. Drums built before this time had no badges at all. It was standard practice by about 1915 to mount a metal, oval shaped badge to the batter side counterhoop of each snare drum, oriented on the panel above the air grommet. Some mid 1910s examples have a second badge applied inside of the shell instead of a label. By autumn of 1922, new badges began appearing with the letters "INC" added to denote the company's legal incorporation a few years prior.

A variety of different makers labels were applied inside of Geo. B. Stone & Son's Separate Tension Drums through the years. Some examples from the mid 1910s, however, instead had a second badge fixed to the inside of the shell. (example 1) One commonly seen label from the late 1910s featured the company name in an ornate, old-fashioned font (example 2) and is sometimes trimmed to fit inside of narrow shells or between mounting hardware. This label reappears in the mid 1930s with stamped serial numbers in the 9000 range.

Labels from the very late 1910s and early 1920s tout Stone's newly published Catalog I. (example 3) New serial numbered labels began appearing in January of 1922. (example 4) The serial numbers began at 5000 and were initially accompanied by date stamps. While serial numbers climbed into the upper 9000 range by the mid 1930s, date stamping ended sometime in 1925.

The Seperate Tension drums were manufactured in dwindling quantities through the late 1920s and were included in Stone & Son pricelists as late as 1932.

Do you have a Stone Separate Tension drum? I would love to hear from you! Feel free to send Lee an email at lee@vinson.net. And for more on George B. Stone & Son and the other turn of the century Boston-based drum makers, please visit BostonDrumBuilders.com.