William F. McIntosh was a peripheral figure to Boston's early 20th century drum making industry. Known best for his Patent Snare Strainer and Muffler, McIntosh also sold drums of his own making such as this orchestra drum dating from July of 1903. 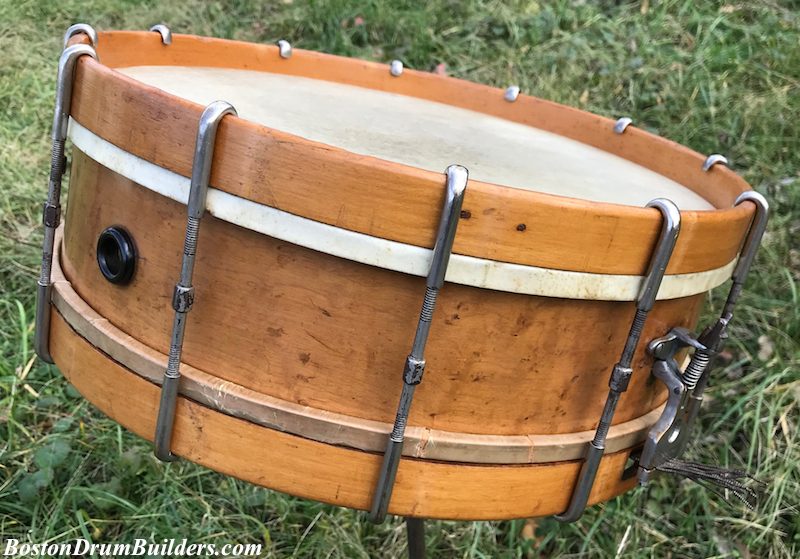 A drum such as this could easily go unidentified if not for a handwritten makers label applied inside the shell opposite the air grommet. The homemade nature of the label is odd if not suspicious given that other extant McIntosh drums from the same era bear printed makers labels. There is, however, reasonable cause to assume that this drum was indeed from the hands of William F. McIntosh such as the strong resemblance it shares with a known 1903 parade drum.

The snare mechanism is an early Stromberg design which was patented in 1904. The parts are stamped "PAT. PDG.", or patent pending, which would suggest the hardware present here was minted sometime after Stromberg's patent was applied for on July 20, 1903 and before the time it was granted on April 5, 1904. 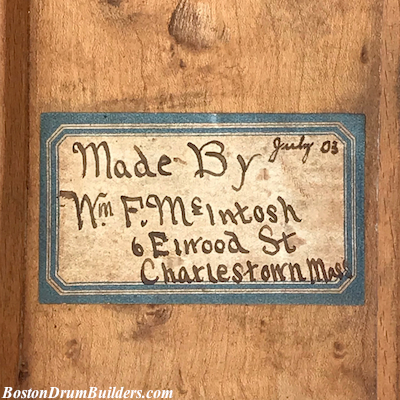 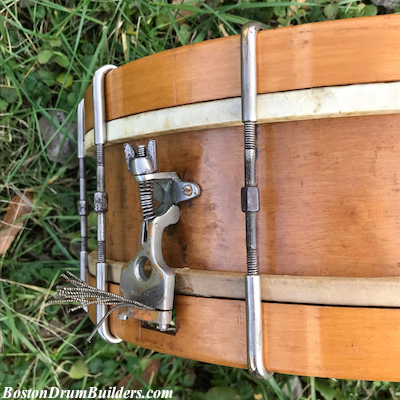 Turn of the century drums were by their very nature experimental. This drum is no exception as the peculiarities abound. The shell measures just under 4 1/2" inches deep. Why choose 4" or 5" when only 4 1/2" will do? An oversized polished rosewood grommet is normal enough though it is installed somewhat off center sitting slightly closer to the bottom edge of the shell than the top. What was the need for this? And curiously, the bottom reinforcing ring is much more narrow than the top. Perhaps this was an oversight due to haste, or could there have been some logic behind the decision? These questions remain unanswered. 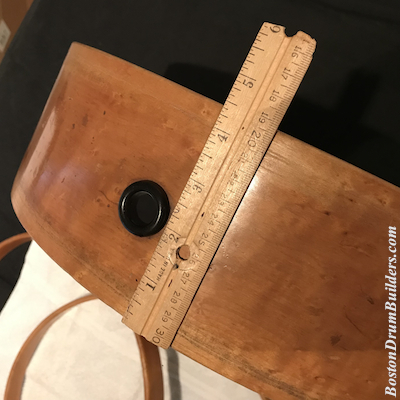 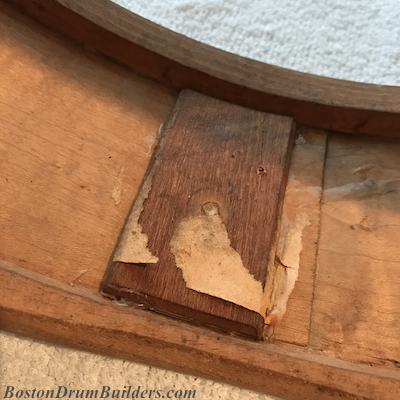 More quandaries arise after a look inside the drum. Several carefully cut wooden panels have been applied inside the shell, one each backing the snare mechanism and butt, and another at what appears to be a crack or weak point in the shell. It is unclear whether these are original to the drum or if they were later additions or repairs. The snare strainer and butt have been removed and then reinstalled in slightly different positions necessitating a little bit of added support seeing as they are attached using only wood screws. Scraps of paper poke out from behind the panel which backs the snare mechanism, but why? 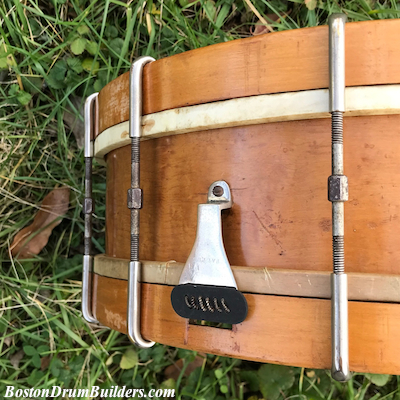 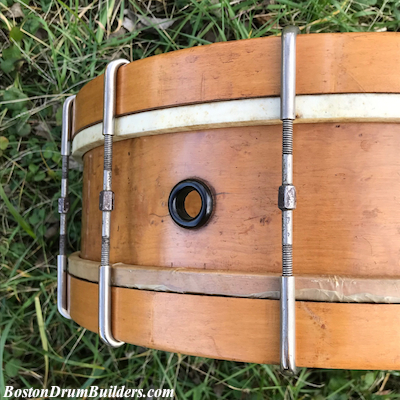 Peculiarities in all, there is an admirable simplicity to the drum in appearance and function. It is not excessively designed or over complicated. Stromberg's snare mechanism which McIntosh chose to employ is forward thinking yet basic. And the tensioning hardware, modern as it may have been for the turn of the century, is uncomplicated and efficient. Not that McIntosh can be credited for any of the subtle advances in drum making technology on display with this instrument, but he was at the very least keeping up with the changing times. One is left to wonder what could have become of him had he spent a lifetime devoted to drum building. McIntosh's career would later pivot towards radio sales and repair, a far cry from his drum making endeavors of the early 1900s.

Do you have a drum made by William F. McIntosh? I would love to hear about it! Feel free to send Lee and email at lee@vinson.net. And for more on the early 20th century snare drum makers of Boston, Massachusetts please visit BostonDrumBuilders.com.