Variations on a Stone Orchestra Drum

Like a twice baked potato or a baseball double header, some things aren't finished until the second time around. The George B. Stone & Son drum featured here is not as it was originally constructed. What was likely a single tension drum to begin with was later modified, the end result essentially becoming a Separate Tension Orchestra Drum not unlike those offered by Stone & Son from the mid 1910s through the 1920s. 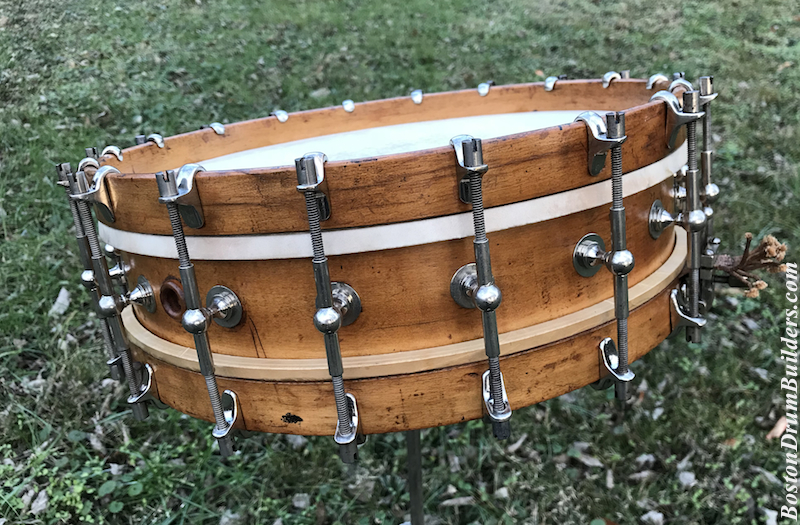 The inside of this drum offers many clues as to how it came to be a separate tension drum. The center reinforcing ring was clearly added later as is evidenced by the fact that it is both crudely installed, and that it covers most of the original makers label. When the ring is removed, the complete label is revealed including an early date stamp from the year 1911. There are certainly earlier Stone drums but date stamping was used sporadically during the early years making this an interesting find.


The decision to install eighteen single post tube lugs on a fourteen inch drum is unusual. By the time Stone's Separate Tension Orchestra Drum became a staple of the Company's lineup (and before the Master-Model was introduced in 1922) twelve lugs was the common configuration on 14" models. The choice to use so many lugs coupled with the early manufacturing date likely indicates that the rebuild happened sometime in the 1910s but before Stone & Son was entering its prime in the early 1920s.

The original strainer was left intact. Most versions of the Stone Patent Snare Strainer and Muffler are stamped with the Stone name but the earlier version installed here reads "McIntosh". A simple leather snare anchor holds the wire wrapped linen snares in place opposite the snare mechanism.


It is impossible to say who was responsible for the rebuild. Stone & Son was known to take on custom jobs of all shapes and sizes and the fact that the newly added lugs are genuine Stone parts suggests that the drum may have indeed gone back to the factory for an overhaul. But the lugs could have also been purchased separately and installed by any reasonably handy drummer which would explain the extremely sloppy workmanship inside of the drum the likes of which are atypical of Stone.


The most puzzling aspect of it all may be the relocation of the vent hole which was required to accommodate the lugs. The original vent hole was plugged and is mostly concealed by one of the newly installed lugs so that the patch is only visible from the outside when the lugs are removed, though two deep gashes emanating from the site of the old vent suggest the original grommet didn't go down without a fight. So why not just use sixteen lugs and leave the original vent hole and grommet alone? The answer to that question was made about 100 years ago and is lost to history. What is left behind is a unique piece of Stone history which has a story - or two - to tell.