Joseph B. Treat was a well-known drummer and drum maker in Boston during the mid to late 19th century. A native of Connecticut, Treat arrived in Massachusetts by 1860 and briefly served as a drummer in Boston's Independent Corps of Cadets during the Civil War. A musician by vocation, he worked extensively in the musical instrument trade as well. Treat's most recognizable work as a maker was for Thompson & Odell during the 1880s and early 1890s.

Through much of the 1860s and 1870s, directory listings place Treat at addresses corresponding to the workplace of Asa Warren White suggesting that Treat worked alongside or was employed by White during these years. Signed makers labels offer further evidence that the two men were affiliated in some capacity well into the 1870s though they diverged shortly thereafter. Directories list Treat independently under 'Musical Instrument Makers' in 1879, and both Treat and White are absent from the Boston Business Directory in 1880 before reappearing at separate addresses the following year. Beginning in 1881 Treat's place work was 177 Washington Street confirming that he was by then employed by Thompson & Odell.

Treat likely produced the drum seen here during the narrow window of time after leaving White's shop, before landing at Thompson & Odell.

A large makers label inside the drum reads: "CIRCULAR / Having located at 50 Bromfield Street, Room 24, I am prepared to furnish Drums of any, and all descriptions, of the best materials throughout, also Rodger's Drum Heads, and Drum Findings of all descriptions, at the lowest possible prices. / Uniform sets of Drums, for Corps, made at the shortest notice. Old Drums remodelled and repaired in the best manner. / J. B. TREAT, / 50 BROMFIELD ST., ROOM 24 / I invite my old friends and customers to / "CALL ROUND." / Pin this up in the Band Room." The drum is straightforward in construction, typical of military style drums manufactured in Boston during the decades following the Civil War. Formed from a single ply of maple, the shell is held at the seam by a line of small brass tacks. Slightly unusual is the orientation of the air vent and snare beds which are often placed further around the shell from the seam.

Do you have a drum made by J. B. Treat? I would love to hear from you! Email Lee anytime at lee@vinson.net. And for more on the early 20th century snare drum makers of Boston, Massachusetts please visit BostonDrumBuilders.com or follow @old_boston_drums on instagram.

Email ThisBlogThis!Share to TwitterShare to FacebookShare to Pinterest
Labels: A. W. White, J. B. Treat, Thompson and Odell

Boston's George B. Stone & Son manufactured a vast number of single tension, thunmbscrew rod drums during the early decades of the 1900s. The paper label inside of this example is date stamped March 1912, roughly a decade before the company reached its zenith. 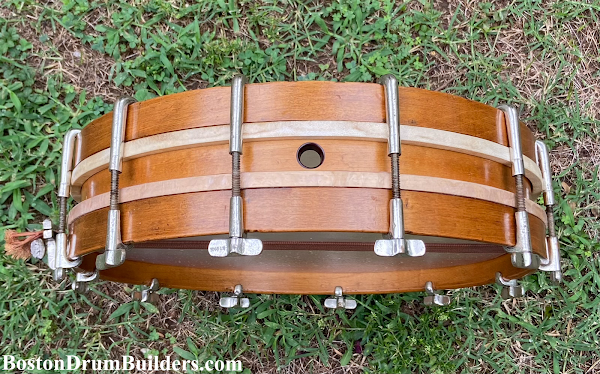 Of special interest here is the extremely shallow shell measuring only two inces in depth. The rosewood grommet is cleverly recessed into the shell to prevent it from obstructing the flesh hoops as the heads are tightened. An early version of the Stone Patent Snare Strainer and Muffler is stamped with the inventor's name rather than "Stone" which is common on later examples. As is often the case, the original arm has broken off and gone missing. The original 'flexible waterproof woven' snares, however, remain intact. Do you have a Stone & Son drum? I would love to hear from you! Feel free to send Lee an email at lee@vinson.net. And for more on George B. Stone & Son and the other turn of the century Boston-based drum makers, please visit BostonDrumBuilders.com or follow us on Instagram: @old_boston_drums.

Harry Augustus Bower (1866 - 1948) was a prolific theater drummer, Vaudeville performer, xylophone soloist, method book author, teacher and inventor with more than a dozen patents to his name. His most prolific period as a maker was during the late 1910s and early 1920s before relocating to Southern California in 1924. The drum featured here is dated February 14, 1921. 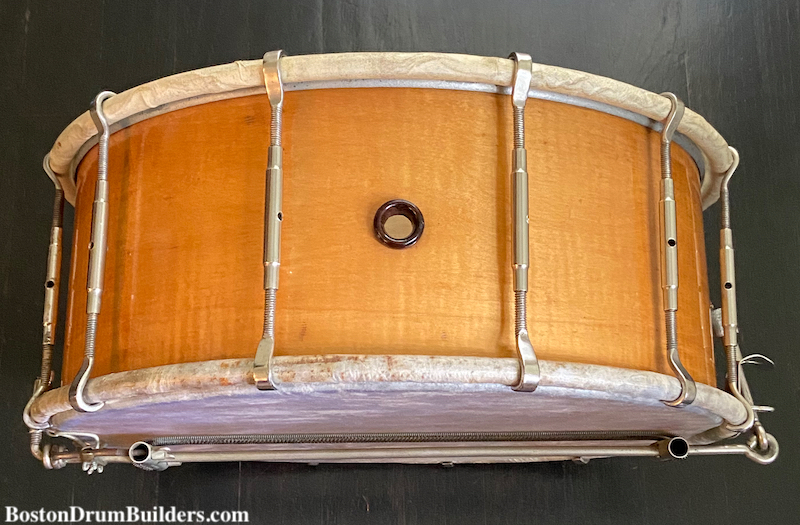 Many of Bower's instruments were eccentric even for their time. In particular, the use of a frame mounted snare system and tubular counterhoops which doubled as flesh hoops were unique to Bower drums. Many variables exist between one Bower drum and the next as the maker was constantly editing and evolving his own inventions. This example is formed around a figured maple shell with metal bands lining the bearing edges. A finely turned rosewood grommet adorns the air vent and an oversized makers label is applied inside of the drum. Most Bower drum shells have no snare beds instead relying on the snare frame to keep the wires in contact with the bottom drum head. In this case, however, the shell has deeply cut beds which dictate that either the strainer or butt must be oriented directly underneath the badge. This must have been intentional on the makers part and probably explains why many Bower drums have conspicuously dented badges where the strainer often rests against the shell when engaged. Do you have a Bower drum? I'd love to hear from you! Feel free to send Lee an email at lee@vinson.net. And for more on Harry A. Bower and the other early 20th century drum manufacturers of Boston, Massachusetts, please visit BostonDrumBuilders.com or follow us on Instagram: @old_boston_drums.

Email ThisBlogThis!Share to TwitterShare to FacebookShare to Pinterest
Labels: Bower

First advertised in 1922 as the "All-Weather Drum", George B. Stone & Son's newly introduced flagship snare drum was renamed the "Master-Model Drum" later that year. Described as a "Combination Dance and Theater Model", the All-Weather Drum was initially offered in only one size, 5 1/4" x 14". The example shown here dating from August of 1922 precedes the adoption of the Master-Model name. 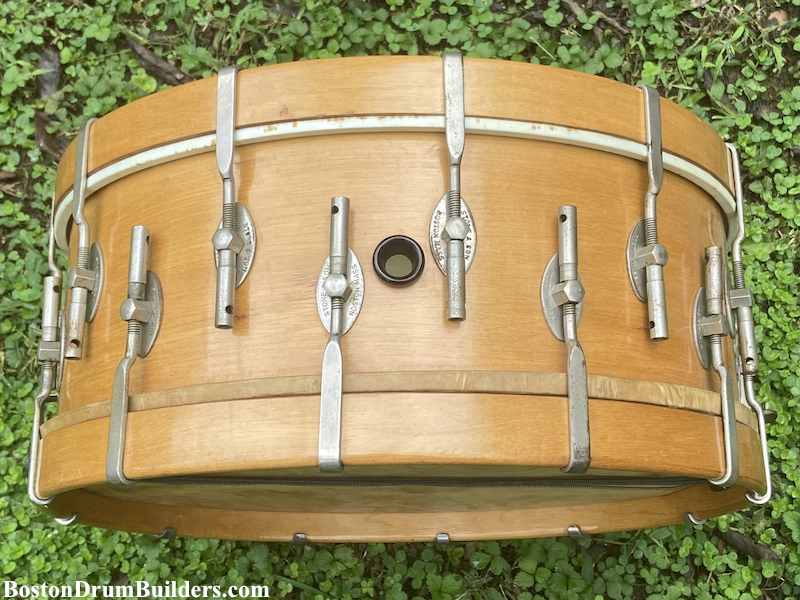 There are several characteristics of the All-Weather Drum which distinguish it from the vast majority of the more than 800 Master-Models produced from the early 1920s through the late 1930s. The earliest shells such as this one are formed from single-ply maple with a series of four reinfircing rings which span the entire depth of the shell. By mid-1923 this design would give way a 3-ply, 5/8" thick maple shell which was used on all Master-Models and Separate Tension Orchestra Drums moving forward.
Most Stone drums of this era feature a metal badge affixed to the batter side counterhoop. Interestingly, while this drum has a makers label with a strong date stamp and serial number, it has no badge. This is likely because Stone was in the process of changing over from an older version to a newer badge which included lettering noting their recent incopration. Also, the Master-Model specific badges installed on most examples had not yet been introduced. While there are pencil markings present inside of the shell and underneath the counterhoops, they are not consistent with the numbering system later used by Stone to keep track of the total number of Master-Model drums produced. The drum features an elongated, inverted version of William F. McIntosh's Patent Snare Strainer and Muffler which was standard on all Master-Model drums. The butt end seen here is patented design by Charles A. Stromberg which was used on Master-Model drums until about 1925. Do you have a drum made by Geo. B. Stone & Son? I would love to hear about it! Feel free to drop Lee an email at lee@vinson.net. And for more on the early 20th century snare drum makers of Boston, Massachusetts please visit BostonDrumBuilders.com or follow @old_boston_drums on instagram. 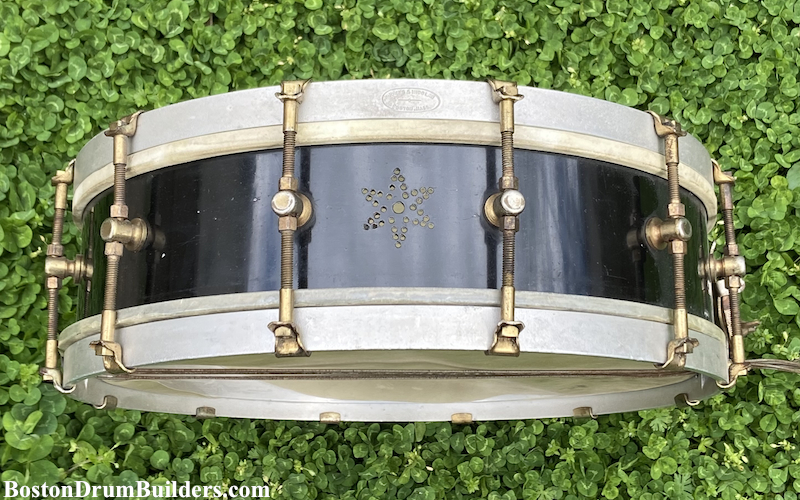