What Can Shellac Do For You?

Refinishing the 1920s Stromberg Invincible Orchestra Drum proved to be a significant undertaking, but it was an enjoyable one none the less. Before touching the shell with any new finish, I did my homework as I wanted the new finish to be as authentic to the original as possible. I came to learn that shellac was the wood finish of choice during the early 1900s, and with a little testing of the old finish (what was left of it) it was determined to in fact be shellac. So I set out to find a type of shellac that would most closely match the original. This proved to be a real learning experience!

All shellac is not created equal, I soon realized. While shellac is often sold premixed today at big box hardware stores, I wanted to be able to control how fresh the shellac was, and exactly what grade of shellac would be used. Dried shellac (the material dissolved into alcohol to make the liquid finishing product) comes in a couple of forms including flakes and 'buttons'.

My original assumption was that the lightest available grade, a.k.a. "blond", would be the one to use. But after testing it on some scrap maple, it was apparent that the blond shellac imparted no color at all to the wood and would not come close to matching the original finish. More research was needed.

I came to learn that blond shellac is a highly refined product which is filtered, bleached, and de-waxed to achieve this almost completely clear color. What I needed was something closer to the original which was likely "orange" shellac still containing its naturally occurring wax. After testing and comparing four more samples of shellac, we had a winner!

Seen above as letter 'D', it is the purest, most unrefined form of buttonlac (that would be raw shellac in 'button' form) I could find. And what do you know, when dissolved in alcohol and applied to maple it looks shockingly similar to the finish on all the early 20th century snare drums on my shelves!

I chose to apply the shellac with a pad made from linen wrapped around part of an old athletic sock. Padding the shellac, which dries very quickly, helped avoid brush strokes and runs. The job I did is far from perfect, but at first glance it really does look like the original finish! The color turned out being a very, very close match so I am happy about that. 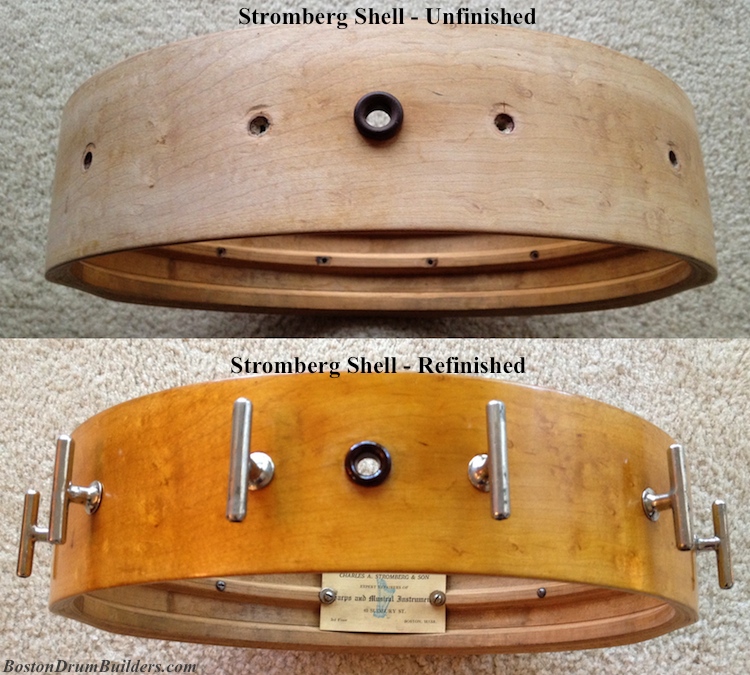 The hardware is polished now, and the lugs are back on the drum looking much more shiny than before. All we lack at this point is new calfskin heads which I will tuck to fit the drum. More pics to follow once the project is complete!

Email ThisBlogThis!Share to TwitterShare to FacebookShare to Pinterest
Labels: Stromberg

Braided Linen was for a time used as a substitution for natural gut. It was catalogued under various names by different companies but it was essentially the same thing: waxed string. The advantages of linen string were that it was pliable and easy to work with, and was impervious to changes in temperature in humidity unlike natural gut. Linen snares were offered in a variety of gauges and in several different colors including black/white, and red.
Wire Wound Silk is exactly that - a thin strand of silk wrapped with wire. Similar versions were offered with a core of linen or cord rather than silk. The concept is not unlike that of some guitar strings though the coil spacing is much wider on snare wires than guitar strings. Wire wound silk snares function a lot like gut but produce a brighter sound and, unlike natural gut, are impervious to changes in temperature in humidity.
Excellent reproduction wire wound silk snares are currently available from, Adrian Kirchler who makes both a "European" and "American" gauge. The American gauge is a very accurate copy of what was used in the 1910s - 1920s by Ludwig, Leedy, Duplex, Stone, and Nokes & Nicolai amongst others.


Coiled Wire, aka 'Snappy Wire', is just like the wire snares we see today only the strands were not soldered onto an end piece as they are now. Instead, long strands of coiled wire were strung onto the drum in a similar fashion to gut or wire wound silk.

With the growing popularity of the 'James Snappi Wires' through the 1920s, coiled wire mounted in this fashion soon became a thing of the past. The James Snappi Snares are nothing more than coiled wire soldered onto metal end pieces which can be more quickly and easily mounted on a drum. It is their simplicity of use and their bright, 'snappy' sound which have made this type of snare wire the most popular in the world today.


Natural Gut is the most traditional material used for snares and is made from animal intestines. After the 1920s and 1930s, the use of gut began to fall out of favor as drummers moved towards the brighter sound of wire snares for modern styles of popular music. However, some symphonic percussionists continued to use gut as did many rudimental drummers who preferred the dark, dry sound it provided. Today, synthetic materials such as nylon cable or coated stainless steel cable have largely replaced natural gut.

Natural gut can still be obtained from several sources including The Cooperman Company who carries it in several different gauges. Their thinnest gauge is most appropriate for combo sized drums and symphonic use while their thicker gauges are best suited for field drums such as reproduction Revolutionary and Civil War rope tension drums. 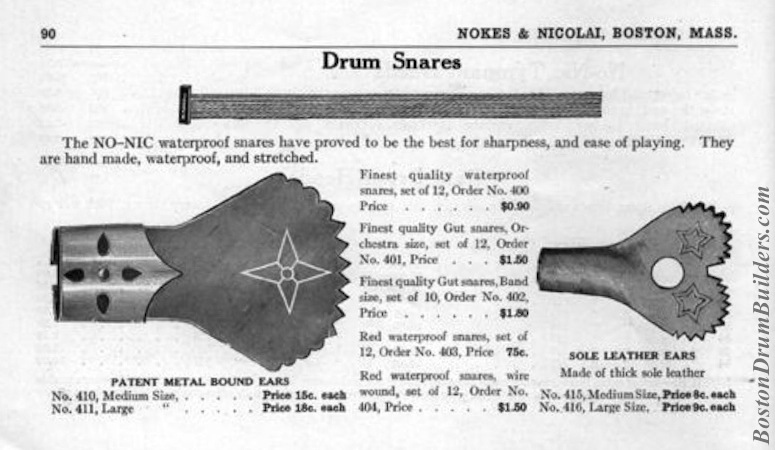 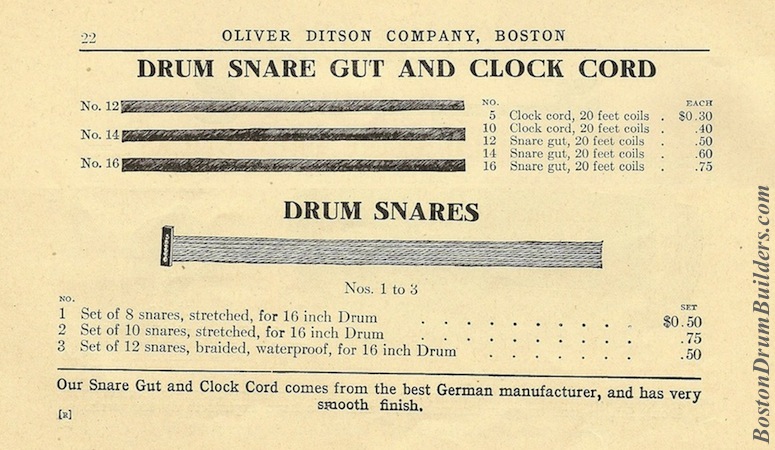