The Quinby family's long involvement in brass instrument manufacturing and their associatioin with bandleader and instrument maker David C. Hall is well documented in both the The New Langwill Index and Grove Music Online. The short version is as follows.

'Hall & Quinby' first appears in the Boston City Directory in 1866. Elbridge G. Wright joined with the Quinbys in 1870 to form 'Hall, Quinby, & Co.' Following Wright's death in 1871 the name reverted to 'Hall & Quinby'. Upon the departure of Hall from the business around 1875, the company name was changed simply to 'Quinby Brothers'. In 1884, Quinby Brothers was purchased by Thompson & Odell and became the Standard Band Instrument Company. The Quinbys left the musical instrument business after this time and went on to manufacture rotary machine shoe-brushes.

The Hall & Quinby drum featured here, with a handwritten label dated August 1873, fits neatly within the above timeline.

Twin brothers Benjamin Franklin Quinby (1830-1890) and George Washington Quinby (1830-1876) were reportedly building brass instruments in Boston as early as 1861. Around 1865 they were joined by elder brothers Leonard Quinby (1817-1887) and John O. Quinby (1827-1911). For all their success as instrument manufacturers and inventors (including an 1872 patent for improving military brass instruments) the Quinbys were not known as drum makers. But a surviving sales reciept documenting the purchase of "One 16 inch Brass Drum" with "Extra Engraving" confirms that Hall & Quinby did indeed sell drums. 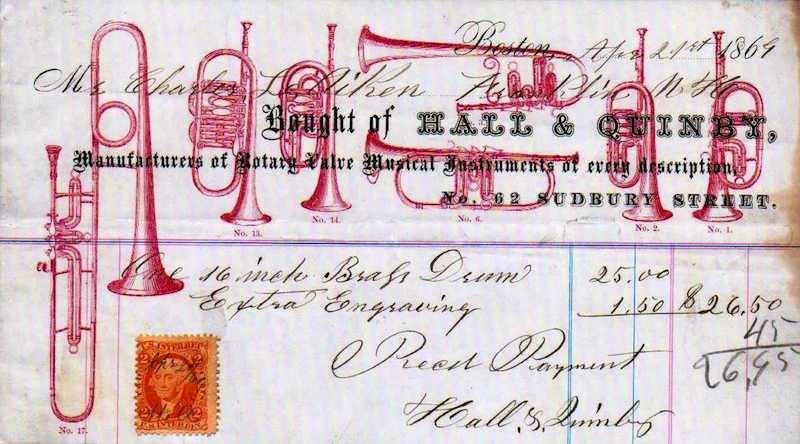 Whether or not Hall & Quinby manufactured drums is another question. A drum from the collection of John Gibson, viewable online at the Vermont Virtual Civil War Museum, bears a D. C. Hall emblem but a label inside the shell lists its more likely source of manufacure, Asa W. White. In keeping with the focus of their business, Hall & Quinby advertising commonly depicts valved cornets or bugles.

The drum seen here likely began it's life as a common rope tension drum though numerous modifications prevent us from seeing it in original condition. Indentions in the wooden counterhoops suggest that metal Prussian style rods and claws were installed at one time. Later, a second set of holes was drilled in the hoops for the drum to be converted back to rope tension with the original holes filled and the hoops refinshed.

Hall & Quinby brass instruments commonly have ornately engraved bells. Such decorative touches are rarely seen on drums of the same era. The only hint of ornamentaion here is the wooden grommet lining the air vent and an adjustment screw for the snare mechanism which may or may not be original to the drum.

Do you have an antique Hall & Quinby drum? I would love to hear about it! Send Lee an email at lee@vinson.net. And for more on the early 20th century drum makers of Boston, Massachusetts, please visit BostonDrumBuilders.com.