Perhaps best known for his Patent Snare Strainer and Muffler, William F. McIntosh also built drums of his own including this parade drum dating from 1903. 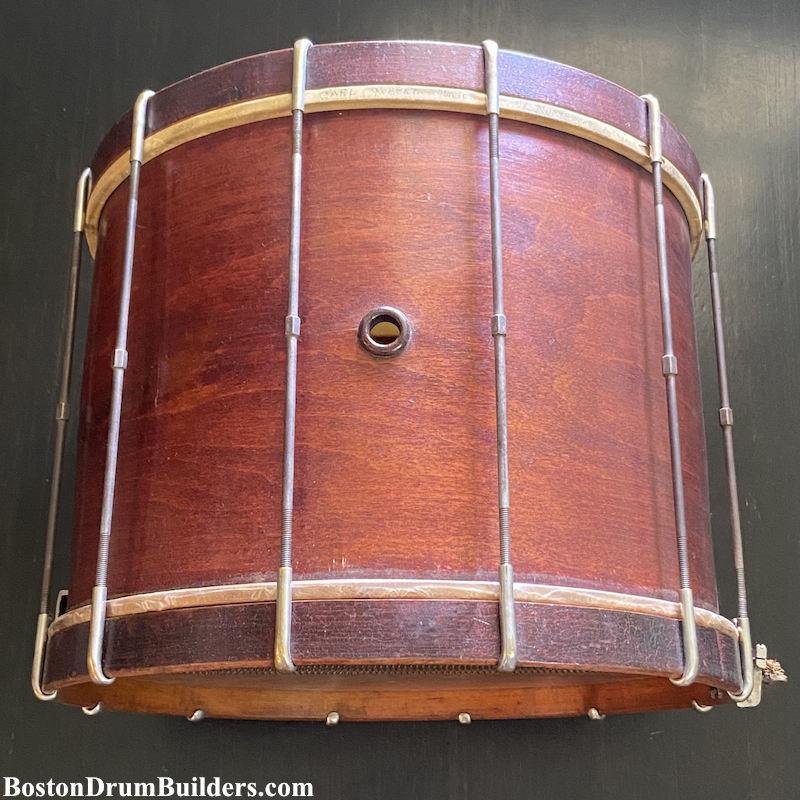 Interestingly, the drum predates McIntosh's patented snare strainer design. The shell bears witness marks indicating that the original snare mechanism was of a design by Charles A. Stromberg. Only later was it removed and replaced by a McIntosh snare strainer which mounts to the snare side counterhoop. The original Stromberg butt end, however, remains in place and is stamped with the wording "PAT PDG", or patent pending. Stromberg's patent was granted in April of 1904 so the piece installed here must have been produced before that date. This makes sense as the drum appears to have been built in 1903.


The label is nicely preserved and reads: "Made by / Wm. F. McINTOSH / Manufacturing Drummer / High Grade / Drums, Traps and Drum Findings / Professional Xylophones and Orchestra Bells a Specialty / 6 Elmwood St., Charlestown, Mass." Handwritten on the upper right hand corner of the label is the date May 18, 1903 and the name Harry Cade. The date is scribed again in bold ink on the drum shell just above the label. While the handwriting in both cases is less than official looking, the date does seem to correspond precisely with the point in time when the drum was likely produced.

The snare wires are of an unusual design. The end of each strand is made from linen cord while the length that contacts the snare side head is made from coiled wire. It is a clever combination of materials where the linen chord provides flexibility for easier mounting while the coiled wire offers a brighter sound quality. And unlike natural gut, the more commonly used material for snare wires on larger drums, McIntosh's snares are not susceptible to changes in temperature or humidity.

Harry Folsom Cade (b. April 5, 1879) figures to be the original owner owner of the drum. The 1910 Census lists Cade as an orchestra musician living at 4 Warwick Park in Cambridge, MA with a wife and son. It is entirely plausible that a 24 year old Cade would have purchased the drum new from McIntosh in 1903. And Cade very well may have taken the drum back to McIntosh a few years later to have the snare strainer replaced. The two men lived less than five miles apart.

Whatever use the drum served for Cade and successive owners, it is a powerful instrument which would have been ideal for parading down the avenue with a drum corp, or possibly keeping the beat behind a large concert band or orchestra when a military type sound was desired. The drum has held up well for more than 114 years with only minor repairs. A gentle cleaning and a new snare side head now have this drum in very good condition for display.

Do you have a drum made by William F. McIntosh? I would love to hear about it! Feel free to send Lee and email at lee@vinson.net.