One drum, two makers labels, three addresses. Depending on how all this information is interpreted, the drum featured here either originated from Boston's Thompson & Odell, or from the hands of a lesser known drum maker from Maine by the name of M. Woodman. 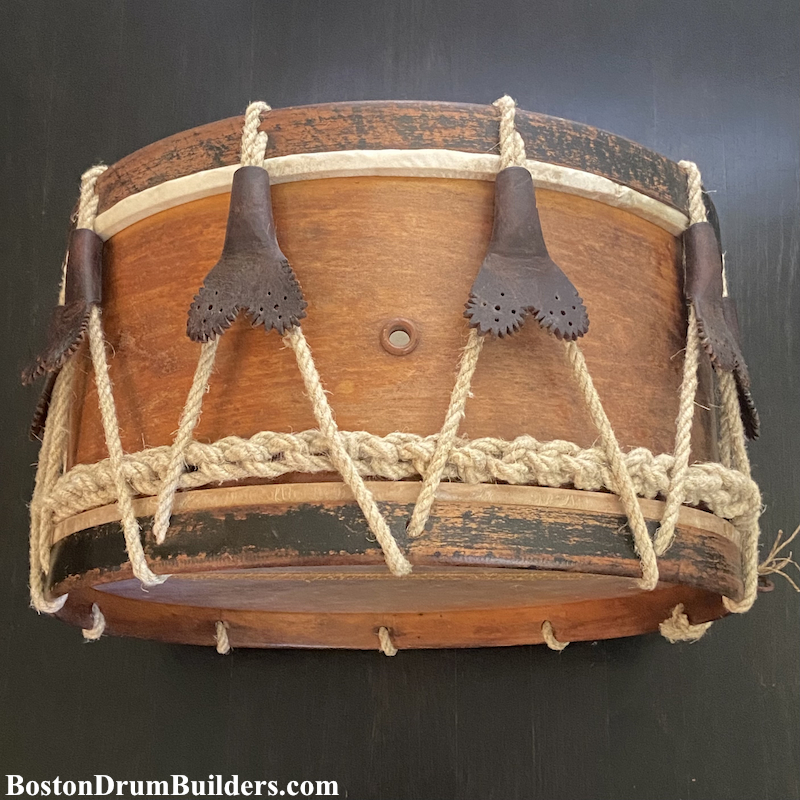 From the very beginning, Thompson & Odell sold instruments from other manufacturers in addition to those made in house and it can sometimes be difficult to discern instruments produced by Thompson & Odell from those which were contract built and relabeled. Thompson & Odell's "Artist Drum" was a described as a "street instrument" intended for "military and semi-military purposes" and was crafted for many years by Joseph B. Treat and later Charles A. Stromberg. In the case of the drum featured here, there is no specific drum maker named by Thompson & Odell leaving open the possibility that someone other than Treat or Stromberg was the builder. An additional label found inside of the drum lists a separate maker and raises as many questions as it answers.


This second label bears the name of a lesser known drum manufacturer from Skowhegan, Maine by the name of M. Woodman. Handwritten on the upper half of Woodman's label is the wording "Thompson & Odell / 177 Washington Street / Boston Mass". This might suggest that Woodman produced the drum for Thompson & Odell, though the address on Woodman's label post dates the Thompson & Odell label bringing this assumption into question. It could be that Manson Woodman did in fact build the drum and that Thompson & Odell was using up an existing stock of labels listing their old address. Or it could be that he was only a repairman in this case who later added his name to the drum after servicing the instrument. It is impossible to know for sure. Woodman would in fact set up shop in Boston later in his life but wasn't known to have been an active drum maker in Boston until about 1883. Both makers labels present here predate this point in time.


Manson Woodcock was born November 28th, 1816 in Sidney, Maine to George Woodcock and Maria Robinson Woodcock. In 1838 at the age of 22, Manson legally changed his last name to Woodman and by 1840 was living on his own, still in Sidney. He married Prudence Pitts Delano in 1843.

The 1850 and 1860 censuses show Manson Woodman living in Farmington, Maine and in 1861 "A Business Directory of the Subscribers to the New Map of Maine" lists Woodman as a drum maker there. A fascinating series of letters held in the Maine State Archives show Manson reaching out around this time to military officials seeking contracts to build drums for the Civil War effort. Despite several appeals, it does not appear that Woodman was ever able to secure such a contract. But Manson's letters are telling of his aspirations and the lengths to which he was wiling to go in an effort to grow his business as a drum builder.

A man of many trades, Woodman is listed as having had a variety of occupations over the course of his life including that of a machinist, a coffin and casket manufacturer, and as a maker of drums, banjos and tambourines. Further evidencing his entrepreneurial nature, he is credited with an 1867 patent for a "new and useful Improvement in Horse-Rakes". The patent filing goes on to state that the improvement in fact "relates especially to the horse-rake patented [in 1849] by Calvin Delano" who was Woodman's father-in-law.


Sometime in the 1870s Woodman relocated to Skowhegan, ME where he further established himself as a drum maker. The 1877 New England Business Directory lists Woodman as a Drum Manufacturer there. Many directories published around this time show Woodman having dual trades including the 1883 Atlas of Somerset County, Maine which lists Woodman as a "Manufacturer to order of Coffin and Caskets in all styles of finish. Also of Drums of all kinds, Banjoes, and Tambourines at shortest possible notice."

Around 1883 or 1884, Woodman relocated to Boston where he first appears in city directories in 1884 as a drum maker at the Abattoir Grounds. At this advanced stage in life, aged more than sixty years, Woodman seems to have focused his attention fully on drum making. The culmination of these efforts can be seen in his 1890 patent for a drum which aimed to "dispense with the “skin" or “flush” hoops hitherto used in connection with the “cord-hoops" for securing the drum-heads in place upon the shell, whereby the construction of the drum is simplified, its cost reduced, and a greater clearness and brilliancy of tone secured."

Less than one year after his patent was issued, on May 8, 1891, Manson Woodman passed away in Boston at the age of 74. He was laid to rest in his native Farmington, ME.

Spinning forward several decades, a 1921 letter written to Boston's S. A. Woods Machine Company and later published as part of a 1922 advertisement in "The Wood-worker" discusses Woodman's planer which had recently been refurbished and was still in use. This same planer was purportedly used by Woodman to construct a mammoth 10 foot bass drum for the "Peace Jubilee in Boston in the '70s". The World's Peace Jubilee and International Musical Festival was held in Boston in the Summer of 1872 and photographs from the well documented event indeed show a giant bass drum at the very center of the newly constructed Coliseum. The drum would have served as a grand centerpiece of the festival's musical offerings and a monument to Woodman's musical instrument building endeavors alike.

W. Lee Vinson is a classical percussionist, music educator, and snare drum historian. He is the author of BostonDrumBuilders.com, a website devoted to the late 19th and early 20th century drum makers of Boston, Massachusetts.