This is a drum with a memory. It remembers the the real book charts and the sounds of rehearsals past. It remembers the smoke filled jazz clubs and cocktail bars, the buzzing feeling of a room full of liquored up party goers. It recalls being the cherished possession of a proud drummer who gave great attention to maintaining the drum and was meticulous about how his instruments were set up on the bandstand. And it remembers the neglect of being stored away for decades in the back of a closet somewhere in Maine before an estate sale brought it back to the surface once again. All of these memories are evident upon close inspection of this roughly 90 year old Supertone snare drum from Boston's Charles A. Stromberg & Son. 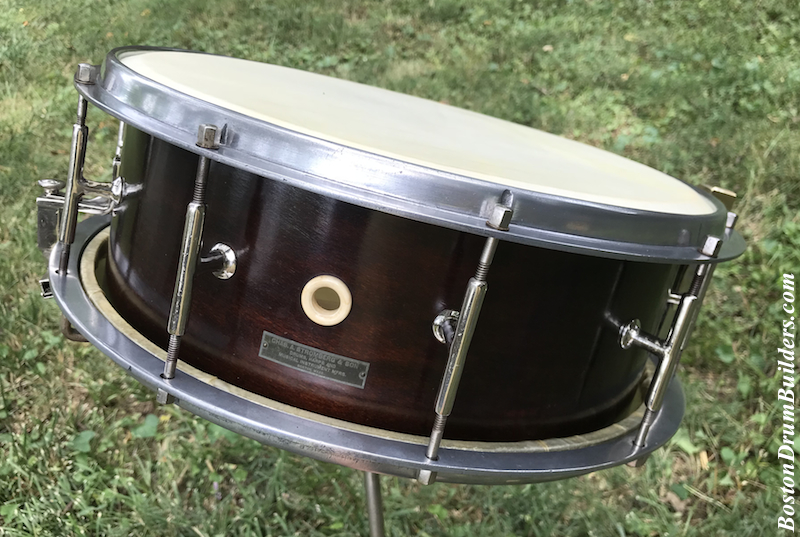 Stick marks left on the old (now replaced) batter side head suggest whoever last used the drum was a light player, not a heavy hitter. He was a concise with his motions, consistently striking the same beating spots, the stick marks focused in very small areas. He took very good care of his instrument tucking high quality calfskin heads onto heavy aluminum flesh hoops. The heads were tucked German style no less, perhaps in an attempt to prevent the skins from binding against the counterhoops, or maybe in an effort to have the hoops stand a bit higher above the otherwise exposed bearing edges.

Upon disassembling the drum, the cobwebs inside prove it has not been paid attention to for quite some time. When touched with a lightly damp cloth, the tangible smell of cigarette smoke leaps from the wooden shell's unfinished interior.

The die cast aluminum counterhoops were technologically ahead of their time. The top and bottom hoops are virtually identical with no accommodation made for the snare wires on the underside of the drum. But it is obvious which hoop is which by the scars left behind on the bottom counterhoop from a sharp edged snare drum stand. The scratches are isolated to three particular areas of the bottom counterhoop making it clear the drum was placed on its stand the same way every time it was played, night after night, gig after gig.

There are signs of a previous soft restoration. A drum of this age can, after all, be forgotten about for a quarter century and brought back to life more than once. Among the more subtle indications that the drum has been previously serviced are the slightly concave washers made this way from well intentioned but overzealous tightening of the lug mounting screws. This is not the careful work of someone at the Stromberg shop, but more indicative of a well meaning yet strong handed repairman. Seven of the ten lug mounting screw have been trimmed short as well in an effort to prevent the screws from extending all the way into the hollowed out tube lugs. The shell finish has been retouched too. At first glance it has a nice sheen but a closer inspection reveals a brush stroked surface not up to Stromberg's usual standards.


The most noticeable aftermarket modification is to the oversized snare throw-off lever which in its current state is unique from other Stromberg snare mechanisms. The work here was exceptionally well done however, the newly altered snare throw-off being almost unnoticeable save its lack of nickel plating. The decision to modify the throw-off may have been more out of preference than necessity. Most Stromberg drums of a similar vintage utilize a taller throw-off arm which on a drum of this depth would have extended above the batter side counter hoop potentially interfering with the drummers sticks.


Years of neglect had lead to two broken heads, some corrosion on the die cast aluminum counterhoops, and a bit of light rust on the tension rods, but otherwise this Supertone has held up quite nicely. Well preserved original features include the nitrocellulose shell grommet and Stromberg's oversized business card serving as a makers label inside of the drum. The 19 Washington Street address helps date the drum somewhere between 1921 and 1926.


Do you have a drum made by Charles A. Stromberg? Feel free to drop Lee an email at lee@vinson.net. And for more on the early 20th century snare drum makers of Boston, Massachusetts please visit BostonDrumBuilders.com.