Featured here is a very early drum for Thompson & Odell by O. A. Whitmore, dating from about 1875. Thompson & Odell was only beginning to become established at the time, a fact underscored by the wording "successors to A .W. White" on the makers label.


Thompson & Odell's beginnings can be traced back to 1872 as "Woods & Odell". In 1873 J. Harrison Woods and Ira H. Odell took in a third partner in Charles W. Thompson forming "Woods, Odell, and Thompson" operating at 121 Court Street. Woods left the company by 1875 after which the remaining two partners established Thompson & Odell at 86 Tremont Street, the address most recently occupied by Asa Warren White and Louis P. Goullard under the moniker "White & Goullaud".


This drum being from right around 1875 places O. A. Whitmore as perhaps the first in a long succession of drum makers contracted by Thompson & Odell that would later include J. B. Treat, and Charles A. Stromberg. Whitmore's makers label also describes his business as specializing in E. B. Mansfield's banjo, a design for which Mansfield received a patent in 1872. 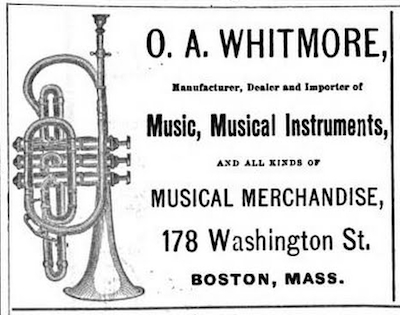 O. A. Whitmore settled north of Boston in Malden, Massachusetts around 1871 and was building drums and banjos at least as early as the mid 1870s. He is listed in the 1876 Boston Directory as a musical instrument maker producing drums and banjos at 282 Washington Street. Before this time, as early as 1871, Whitmore appears in the Directory with the occupation of "musician", but is not included under listings for musical instrument makers.

Around 1879 Whitmore opened his own shop at 178 Washington Street. As of 1880 he was in business with Peter J. Boris at the same address, the firm being known as "Whitmore & Boris". Boris, long active as a musical instrument importer and dealer, had previously been partnered with J. H Woods of Woods, Odell & Thompson. Whitmore and Boris' working arrangement was evidently short lived lasting only until about 1882. Perhaps their business interests merely evolved in a different direction, however, as the two are listed as assignees of an 1882 patent for fish nets of all things.

By 1883 Whitmore had essentially traded one partner for another now joining up with the aforementioned Eben B. Mansfield to form "Whitmore & Mansfield" still operating at 178 Washington Street. The two men together had previously secured a patent for a music stands a few years prior. In addition to manufacturing Mansfield's patent banjos, Whitmore & Mansfield also dealt brass instruments including cornets. But like Mansfield's previous joint business venture, the partnership was short lived. Whitmore & Mansfield vanishes from Boston directories after 1884 as do both individuals for a time.


It could be that Whitmore returned to the road for a few years, or that he simply didn't have a business address in Boston for a period of years. Nevertheless, his music store at 178 Washington Street changed hands at this point as a man named George M. Lane was selling musical instruments there in 1885. By 1886, Lane was gone and D. C. Hall was selling musical instruments at the same address as would be the case for the next several years.

O. A. Whitmore resurfaces in directory listings in 1888 as a music teacher at 179 Washington Street, a professional address shared by several others including J. H. Woods. Whitmore would continue to appear here through the 1890s while living in Malden.

Long before coming to Boston, Osceola Aurelius Whitmore was a native of Reading, Vermont. Born September 2, 1838, he would take up the clarinet at a young age and soon become well established with a variety of minstrel shows eventually taking on management positions and ownership stakes in several companies. This early chapter of Whitmore's life is well described by Frank H. Clark in "History of Reading, Windsor County, Vermont. Vol. II:


Whitmore & Clark's Minstrels was formed in 1866 with Whitmore himself reportedly staying on board until about 1878 before leaving the group to accept more solo clarinet work with various musical organizations in Boston and to pursue his interests in the musical instrument business.

At the time of his death in 1918, Whitmore was remembered foremost as a performing clarinetist and teacher. The final stages of his life perhaps overlapped with but apparently outlasted and overshadowed that of his banjo and drum manufacturing interests and certainly his early career with traveling minstrel shows.

A brief obituary from the Musical Courier published November 28, 1918 reads as follows: "Osceola A. Whitmore, at one time one of the worlds' most famous clarinetists, died Sunday, November 17, in Allston, Mass at the age of 80 years. Mr. Whitmore had been associated with Gilmore's, Carter's, Sousa's and the Germania Bands and the Boston Symphony Orchestra. He had been for twenty-seven years in charge of the orchestra at the Fabyan House in the White Mountains, and was also well known as a teacher and maker of clarinets. Mr. Whitmore passed the greater part of his active life in Malden, was a member of the common council for three years and a member of many fraternal organizations. He is survived by two married daughters."


This particular drum had previously suffered the indignancy of being converted into an end table of sorts. The conversion had been accomplished by screwing three drum sticks into the shell to serve as legs. The legs have now been removed and new heads tucked onto the existing flesh hoops restoring some semblance of respectability to this interesting historical piece.


The snare strainer looks to have been replaced once upon a time as the bottom hoop has been crudely gouged to accommodate a newer but similarly basic mechanism. The gut snares are held in place with a simple leather snare butt as is common for drums of this age.


Rustic condition aside, the construction methods implemented here are more crude than those commonly seen on drums from a decade or two later. Whitmore used not only a series of small tacks to hold the shell together along the seem, but the same is true of both the counterhoops and the re-inforcing rings. Yet signs of high end refinement are simultaneously present as seen in the beautifully polished rosewood grommet lining the air vent and faded remnant of a gilded scroll design ornamenting the black enameled counterhoops.


W. Lee Vinson is a classical percussionist, music educator, and snare drum historian. He is the author of BostonDrumBuilders.com, a website devoted to the late 19th and early 20th century drum makers of Boston, Massachusetts.