Carl Gardner is not well known for his imprint on musical instrument manufacturing. There is no mention of him in Christine Merrick Ayars' Contributions to the Art of Music in America by the Music Industries of Boston, 1640-1936, the single most comprehensive resource for information on early 20th century musical instrument makers of Boston, Massachusetts. But Gardner did for several years partner with trombonist Fortunato Sordillo to form the Sordillo Correspondence School of Music and later the Sordillo-Gardner Music Company which would soon become known as Sordillo-Gardner Inc.

Both Sordillo and Gardner were one-time members of the Boston Symphony Orchestra and each would later hold teaching positions in the Boston Public Schools. Their business partnership, first formed around 1919, dealt a variety of instruments and accessories related mostly to brass and percussion and was, for a time, a distributor for Holton band instruments. Much advertising was devoted to Sordillo's patented mutes and mouthpieces with less attention paid to Gardner's patented machine timpani and so-called "Free Tension Drum" seen here. 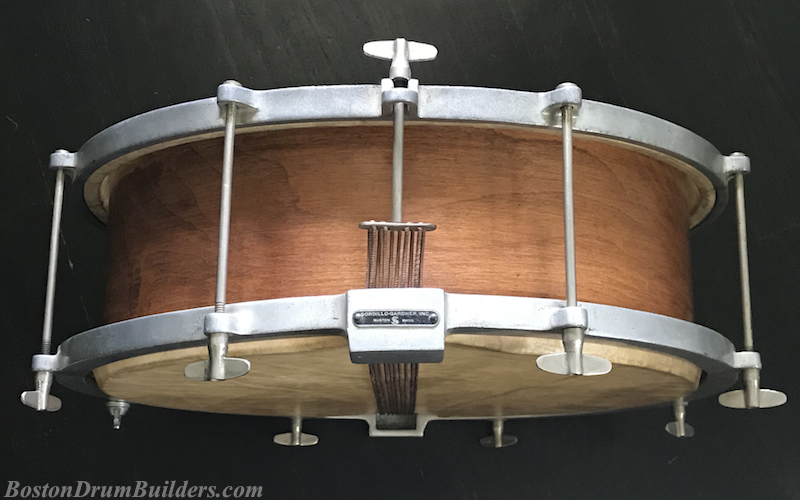 Carlton Edward Gardner, born April 13, 1885, was a native of East Bridgewater, Massachusetts and spent at least a decade of his youth living in Lynn, Massachusetts with his mother and stepfather. Gardner resided in Lynn as late as 1910 before moving to Boston by 1913 where he was married to Marion Gertrude Dillon on September 15th of that year. By the time he became a member of the Boston Symphony Orchestra in 1915 he was in his early 30s and already a published author.

Gardner's Essentials of Music Theory (1912) was the first of several books published by Carl Fischer followed by Music Composition: A New Method of Harmony (1918), Modern Method for the Instruments of Percussion (1919) and the expansively titled The Military Drummer; a Manual on Drum Playing as Practiced in the United States Army and Navy adapted to School and Scout Corps including Drum Duties with Fife and Bugle (1918). Gardner also edited Frank Edward Dodge's Dodge Drum School (1909) for republication by the Columbia Music Company shortly after the authors death in 1918. The title would be edited once again by George Lawrence Stone and republished by George B. Stone & Son in 1928.


Following his departure from the Boston Symphony in 1920, Gardner helped to spearhead the Boston Society of Musical Instrument Manufacturers which aimed to further promote Boston as a center for musical instrument manufacturing. Gardner was one of three directors of the Society, the other two being William S. Haynes and George Lawrence Stone. Among the Society's principal initiatives was a push to encourage Boston schools to purchase instruments locally rather than patronize dealers and makers from other cities or foreign countries. Members of the Society included the Boston Musical Instrument Co, Christenson & Co Inc., Cundy-Bettoney Co., William S. Haynes Co., A. E. Mathey, Musicians Supply Co., Nokes & Nicolai, Sordillo Gardner Inc., George B. Stone & Son and the Vega Company. Gardner's industry presence was evidently short lived as advertising for Sordillo-Gardner ceases after the early 1920s. The Boston Society of Musical Instrument Manufacturers appears to have had a smilarly brief lifespan.

Gardner's timpani and snare drum designs never gained much traction. It is telling that Gardner's Modern Method for the Instruments of Percussion contains photographs of the author playing snare drums which are not of his own make. The 1919 edition pictures him with what looks to be a Duplex drum while the 1927 edition shows him playing a George B. Stone & Son Master-Model.


Gardner's Free Tension Drum is uncomplicated in design and is essentially a single tension thumbscrew model. The main selling point was an extended collar, meaning that the flesh hoops do not come in contact with the shell, which was allowed for by oversized cast aluminum counterhoops. The major drawback was that the bearing edges were left unprotected from rimshots which could potentially ravage the shell. Gardner's model on the whole reads as something less than a professional model when compared even with local makers, and certainly Ludwig or Leedy who were leading the golden age of American drum building during the 1920s. Perhaps Gardner's drum was aimed at students or school music programs which would make sense given his future career teaching in the public schools. Regardless, his drums seem to have achieved very little foothold in the market and surviving examples are scant. 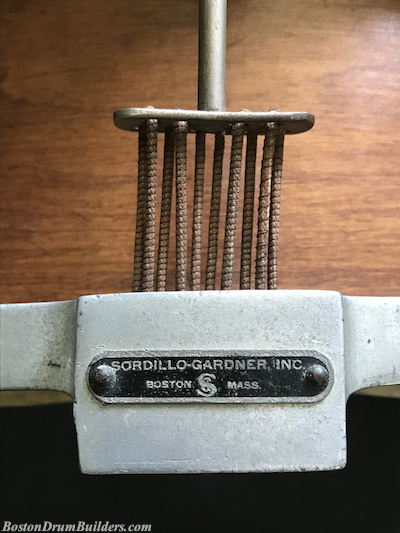 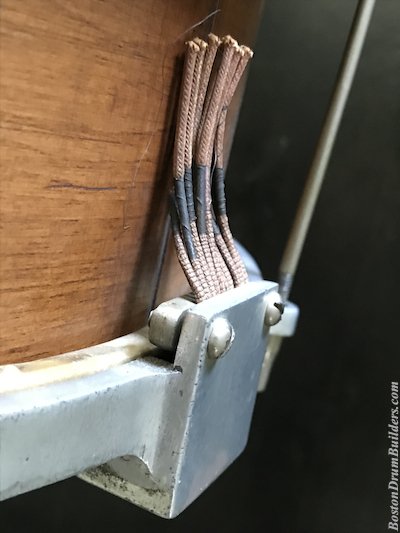 The snare mechanism is basic yet functional in that it allows the snares to be adjusted gradually or to quickly be disengaged. The shell measures in at 14" across by just under 5" deep and is formed from a thin single ply of maple with reinforcing rings at either bearing edge. Sordillo-Gardner advertising makes mention of a metal shell being available for $35. Wood shell drums were priced at $30. One noticeable difference in the example featured above from the one pictured in Sordillo-Gardner's advertising is that the tension rods are adjusted using wingnuts positioned underneath the bottom counterhoop rather than from on top of the batter side hoop, a player friendly modification preventing the possibility that the wingnuts could interfere with the performer's sticks.

Do you have a Sordillo-Gardner drum? I'd love to hear from you! Feel free to send Lee an email at lee@vinson.net. And for more on the early 20th century drum manufacturers of Boston, Massachusetts, please visit BostonDrumBuilders.com.