More than 800 Master-Model drums were produced by Boston's George B. Stone & Son between 1922 and the late 1930s. A wide variety of finishes were offered from black lacquer to white lacquer, and natural maple to marine pearl and sparkling pyralin wrap. But the most commonly seen configuration is the ever classy black lacquer with nickel plated hardware. 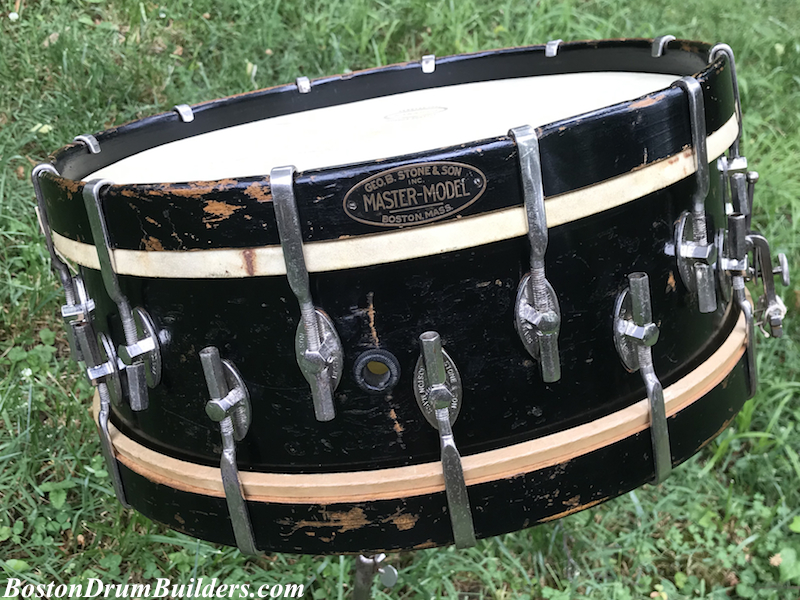 Not every surviving drum can be a gem. The one featured here is a weathered example having sustained its share of bumps and bruises over the decades yet its three ply shell is no less strong and in round despite the obvious cosmetic flaws. The typical Master-Model badge is affixed to the top counterhoop positioned just above the air vent adorned with a ridged synthetic grommet.


The paper label applied inside of the shell is stamped with a four digit serial number per usual but lacks a detectable date stamp. Curiously, a second label hides underneath. The second label, mostly obscured from view, does bear a date stamp though it is not completely legible. But by referencing other dated examples, this drum can be pinpointed to the early months of 1925.

Workers at the Stone factory were keeping a running tally of each Master-Model produced. Pencil markings found inside of the shell and underneath the counterhoops identify this drum as the 334th Master-Model to be produced.


Do you have a Stone Master-Model? I'd love to hear from you! Feel free to send Lee an email at lee@vinson.net. And for more on George B. Stone & Son and the other early 20th century drum manufacturers of Boston, Massachusetts, please visit BostonDrumBuilders.com.