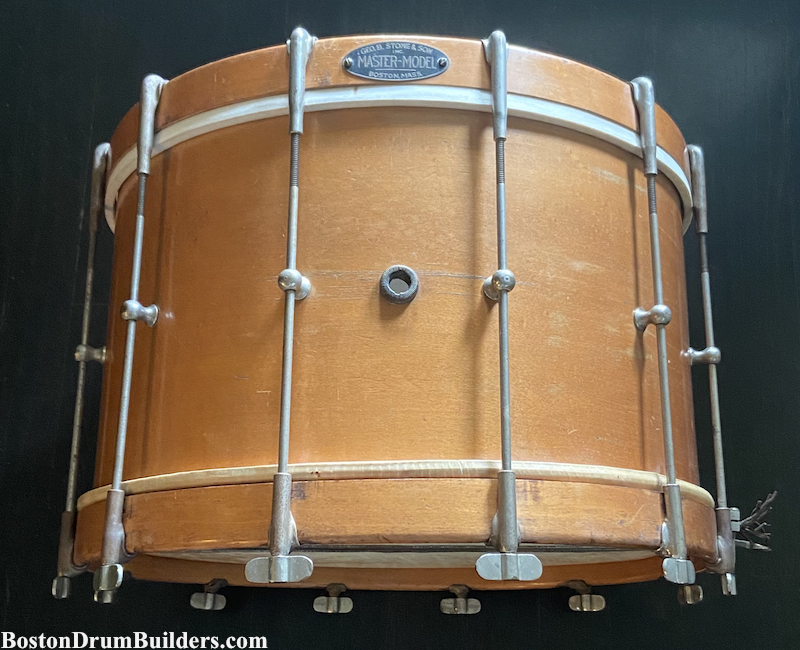 The mid-1930s were a time of resourcefulness and transition for Boston's George B. Stone & Son. With vaudeville theaters converting over to movie houses and the Great Depression taking it's toll, George Lawrence Stone began pouring more energy into teaching and gradually moved away from manufacturing.

It was during this period that Stone & Son mailed out their last known catalog, a sixteen-page, black and white booklet of recycled photographs illustrating a significantly stripped down product line. The iconic Master-Model drum is still spotlighted on the cover and in the opening pages, and several varieties of military drums are also offered, but no Master-Model field drum is mentioned. Serial numbers in the 9300 range are known to have been in use in late 1935 meaning that the drum seen here was likely produced in 1936 - the same year 'Booklet L' was distrubuted.

The drum is simple in construction featuring a thin, single ply maple shell with three reinforcing rings - one at each edge and a third underneath the tuning rod posts. The single-ply maple counterhoops and single tension thumbrods are virtually unchanged from those used two decades earlier. While single tension tuning systems and wooden counterhoops would remain in use into the mid 20th century, they were often indicative of lower priced models. Professional level drums dating from the same era commonly utilized separate tension tube lugs and metal counterhoops, features which had been in use since the 1920s.

Rather then evolve, Stone continued to equip drums with the 'Stone Patent Snare Strainer and Muffler' patented in 1909 by William F. McIntosh. As is typical for Stone, the snares are held in place opposite the strainer by a simple anchor. More advanced snare mechanisms were certainly available by the mid 1930s, but Stone's decision not to modernize is again evident here. But the most obvious indication of where this instrument fits within the timeline of Stone's manufacturing prowess is the use of a Master-Model badge on a drum which is clearly NOT a Master-Model.

Do you have a drum made by Geo. B. Stone & Son? I would love to hear about it! Feel free to drop Lee an email at lee@vinson.net. And for more on the early 20th century snare drum makers of Boston, Massachusetts please visit BostonDrumBuilders.com or follow @old_boston_drums on instagram.