It's been several years now since this rope tension drum labeled by Harry A. Bower floated across eBay and into a private collection. Best known for his influential method books and unusual snare drum designs, Bower was granted more than a dozen patents between 1897 and 1933 pertaining mostly to the design and construction of snare drums, timpani, and other percussion instruments. This older style drum raises the possibility that he may have been an active instrument maker before his more modern designs had been imagined and brought to life. 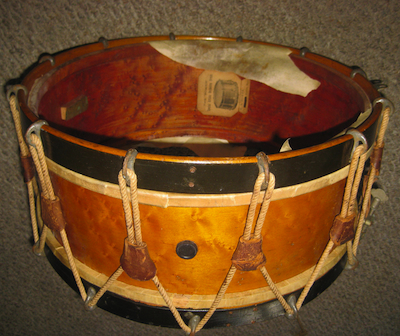 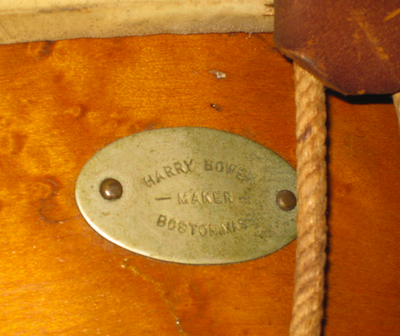 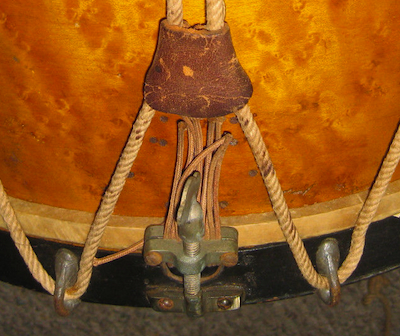 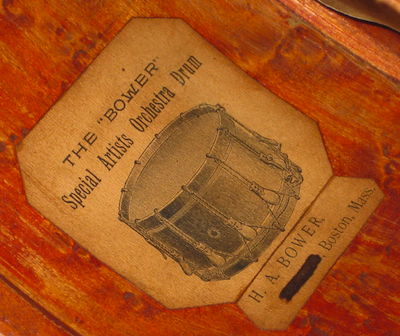 Bower was adamant in stamping his name and patent numbers all over his instruments. And while this drum bears his name on both an oval shaped badge and a paper label inside the shell, there is no visible mention of patents. Bower's earliest snare drum patent was applied for in 1903 and granted in 1904. If this drum were to predate that time, it would be one of Bower's earliest known surviving instruments.

The snare mechanism present here is of a simple, traditional style nothing like those seen in any of Bower's patents. However, extra holes in the bottom hoop indicate that some other mechanism was once installed. One of the few apparent similarities to Bower's later drums is a synthetic grommet adorning the air vent. If original, this would be highly unusual for a drum built around the turn of the century which again raises suspicion of possible after market modifications.

The semicircular snare gate is a somewhat unique trait shared by several other Boston drum builders of the early 1900s. But overall, the drum appears to have more in common with the work of Boston's late 19th century band instrument makers than Bower's own drums of a few decades later. One last mystery here is a series of witness marks or plugged holes in the shell, partially obscured from view by the snare strainer, which are suggestive of an ornamental tack pattern seen on earlier rope tension drums, a cosmetic feature sometimes echoed by Bower on his metal wrapped synthetic shell drums of the 1910s and '20s. 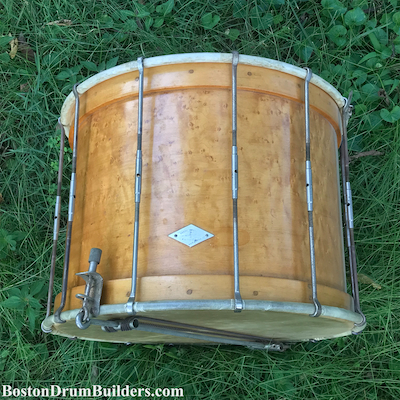 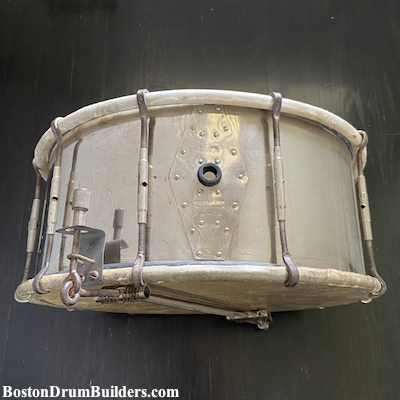 Do you have a Bower drum? I'd love to hear from you! Feel free to send Lee an email at lee@vinson.net. And for more on Harry A. Bower and the other early 20th century drum manufacturers of Boston, Massachusetts, please visit BostonDrumBuilders.com.