Depending on which citation is used, Peter R. Winn was born in either 1805 (according to the Annual Report of the Town of Quincy which records his death in 1886 at age 81), 1807 (according to the 1850 Census which lists Winn, then with the Marine Corps in Charlestown, as 43 years old), or 1810 (according to the 1855 Massachusetts Census which describes Winn as a 45 year old musician living in Boston). Whichever the case, by 1827 Winn had enlisted in the United States Marine Corps where dozens of muster roll reports over the next three decades included him as a drummer or musician. Winn reenlisted with the Marines as late as 1857 and mustered as late as 1859 at Boston Station though it is unclear whether or not his military service was continuous.

Further documenting his military involvement, the 1858 Massachusetts Annual Report lists Peter R. Winn as Drum Major for the Sixth Regiment of the Massachusetts Volunteer Militia. He appears there again in 1860. And the National Park Service's Soldiers and Sailors Database lists Peter R. Winn as a musician with Company B of the 1st Regiment of the Maine Militia State Guards during the Civil War although no specific dates are given.

Winn is also known to have been an active drummaker in Boston as early as the mid 1850s, a trade he was evidently able to balance with his military duties. The 1855 and 1856 Boston City Directories list Winn at 69 Court Street in conjunction with home addresses of 3 Snowhill and 23 Salem respectively. From 1857 through 1861 Winn's occupation is described as "drummer and drummaker" at the address of 21 Salem. The 1862 Boston Directory shows Peter R. Winn as a drummaker at 11 Noyes Place while in 1864 he is again listed as a musician at 21 Salem. 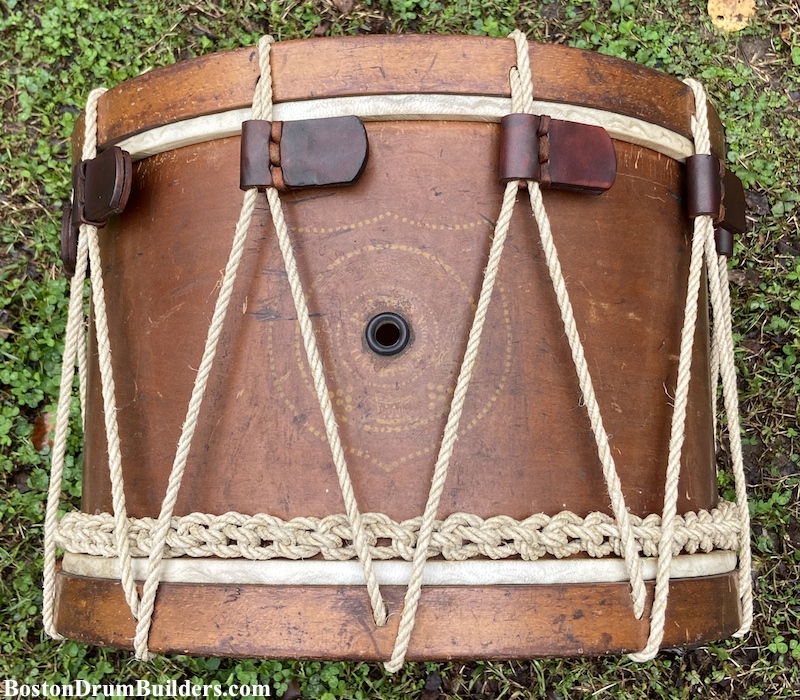 Christine Merrick Ayars' Contributions to the Art of Music in America by the Music Industries of Boston, 1640-1936 offers only a passing mention of Peter Winn reporting that he "made drums in the Civil War days". Perhaps the strongest supporting evidence to be found of Winn having produced drums for the war effort is the inclusion of "P. R. Winn" in the 1861 Massachusetts Treasurer's Report however there is no record of exactly what goods or services were provided.

The drum featured here dates from between 1869 and 1873 while Winn was operating at 121 Court Street in Boston. It is roughly the size of a 'regulation drum' measuring 16 1/2" across by about 11" deep. A large crest shaped decal or painting frames the air vent and lists Winn's name and address surrounded by images of an eagle, two uniformed soldiers, stacks of cannon balls and a military drum. The single-ply maple shell and hoops are held together at the seam with the help of a series of nails or tacks which was common for the era. A simple snare mechanism holds the gut strands in place and allows for tightening or loosening while a leather snare anchor holds the gut in place from the other side of the bottom counterhoop.

An incredibly rare piece of surviving ephemera, now kept in a private collection, is a business card used by Winn to promote himself. It reads:

Prentiss operated at 33 Court Street from 1939 until 1859 and Winn is first listed at a Salem Street address in 1856. So Winn's business card likely dates to sometime between 1856 and 1860 when Elias Howe took over for Prentiss at 33 Court Street.

Do you have a drum made by P. R. Winn? I would love to see it! Send Lee an email at lee@vinson.net. And for more on the early 20th century drum makers of Boston, Massachusetts, please visit BostonDrumBuilders.com.