Amongst the most common styles of drums manufactured during the late 19th century were the so called "Prussian Drums". Featured here is just such a drum from Boston's John C. Haynes & Co.


The J. C. Haynes & Co.1883 catalog gives a bare bones description: "PRUSSIAN DRUMS, WITH RODS, HOOKS, SNARE-TIGHTENER, KEY AND KNEE-REST, OUR OWN MAKE". While other styles could be custom ordered, seven Prussian models are listed with the main difference being the shell material. Maple, rosewood, nickel, and brass shell drums were all offered with "nickel trimmings" and "fancy hoops" as additional cosmetic upgrades. The drum pictured above appears to be an example of model no. 19 1/2 built around a 16" maple shell and outfitted with nickel hardware. 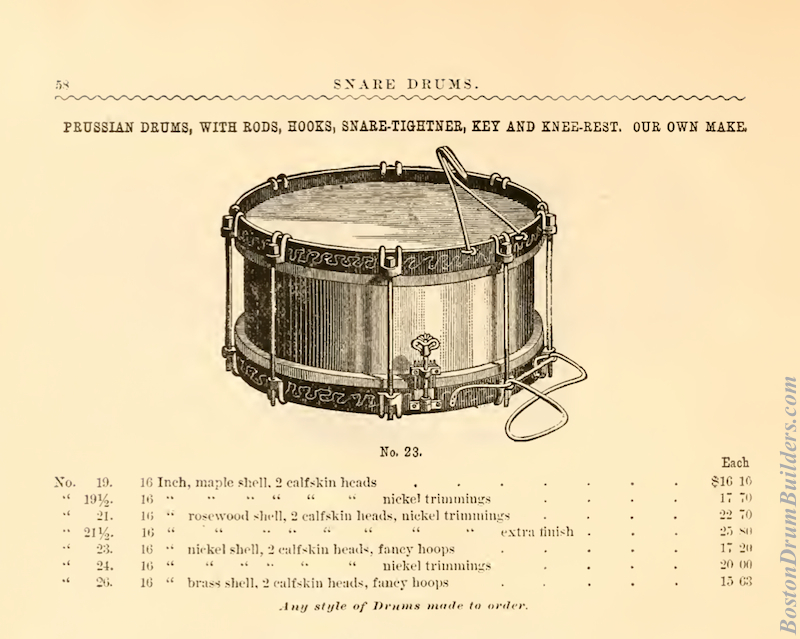 1883 J. C. Haynes & Co. Catalog
The maple shell is quite thin with solid maple re-inforcing rings providing extra structural support. The seam is held together with small brass tacks, a feature common to many larger Haynes drums. A polished rosewood grommet lines the vent hole providing a small element of visual appeal to an otherwise plain drum. Solid maple counterhoops, painted black around the outer face, are roughly cut suggesting that these drums were produced quickly and in large numbers with less attention to detail than some other higher end Haynes instruments.


The paper label affixed to the inside of the drum is rather plain, merely listing the makers name and address underneath an image of a standard rope tension drum. The 33 Court Street address was used by Haynes from the mid 1860s all the way into the late 1890s meaning that this alone is not a reliable dating guideline.

Some smallish, semi-thoughtful modifications were made to this particular drum over the years with an additional (sloppy) coating of shellac being added to the shell, and the original snare strainer being swapped out for another very similar one. Time has taken its toll on the nickel plating leaving the tension rods a steely dark gray color and the claws a dull bronze. The overall effect is, nevertheless, a fairly good representation of one of the most widely produced drum styles of the late 1800s from one of Boston's largest band instrument makers of the era.

For more on the history of John C. Haynes & Company, please visit BostonDrumBuilders.com.