Swedish immigrant Charles A. Stromberg came to the United States in 1887 and found work at Boston's Thompson & Odell where he served as the foreman in their banjo, mandolin, and guitar factory. After Thompson & Odell went bankrupt in 1905, Stromberg went into business for himself. The Artist Drum seen here dates from sometime between April of 1904 and March of 1906 just as Stromberg was venturing out on his own. 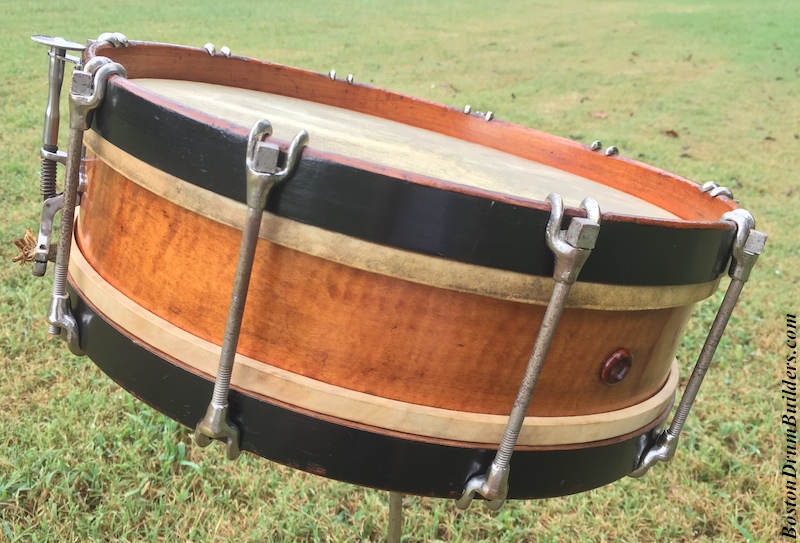 Stromberg was careful to label this instrument as an "Artist" model so that it could not be confused with the higher end Invincible Orchestra Drum which featured patented separate tension lugs. The term "Artist" is a word borrowed from Thompson & Odell's advertising. To that end, Stromberg cut down one of his own paper labels and trimmed out the word "invincible" replacing it quite literally with a snippet from a Thompson & Odell label reading "Artist Drums". Another separate tiny strip of paper inside of the drum simply reads "CHARLES STROMBERG" in block lettering.

More interesting is a unique stamp reading "CHA. STROMBERG / DRUM MANUFACTURER / WASHINGTON STREET". Unfortunately the stamp is too faded to make out the street number, but it is worth noting that Stromberg evidently thought enough of his drum building business at this time to have a stamp identifying himself specifically as a drum manufacturer. Most fascinating is the pencil marking inside of the shell, in Stromberg's own handwriting, indicating that this drum employs his strainer and muffler design patented on April 5, 1904.


The strainer present on this drum is a very close match to Stromberg's original design. It very effectively tightens and loosens the snares though it lacks the ability to quickly engage or disengage the snares from the bottom head. Later versions, or possibly even concurrent ones, were equipped with a throw-off lever which could immediately switch the snares on or off. The strainer and butt seen here are both stamped "PAT. P'D'G", for patent pending, presumably indicating that the hardware was produced no earlier than July 20th, 1903, the date for which the patent was applied.


Though this was not Stromberg's top of the line snare drum, it still bears his trademark crafstmanship from the beautifully figured maple shell, to the polished rosewood grommet lining the air vent, to the streamlined hoop clips which were more refined version of those used on earlier "Prussian" style drums. Another unique touch is a small brass plate reinforcing the snare side wooden hoop. Barely noticeable when the drum is assembled, this shows not only Stromberg's attention to detail, but his knowledge of the instrument in that this is typically a weak point where the hoop can easily crack.


The shell is one ply maple with narrow maple reinforcing rings which is typical for a Boston-made drum of this period. Most unusual is a fixed pinwheel-like wooden structure loosely suspended inside of the shell. The four 'paddles' are joined in the center while only two are attached to the shell. This very strange element seems to have no structural or functional purpose as it does not reinforce the shell and has nothing to do with how the snare strainer operates. 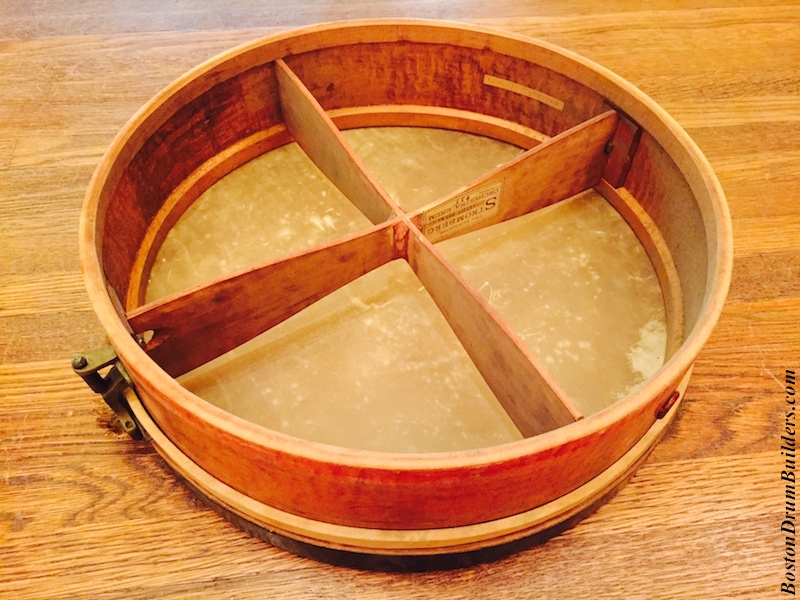 In comparing this drum to nearly two dozen other known examples, nothing like this appears inside of any other Stromberg drum. Furthermore, neither of Stromberg's patents, both of which date from the same period during which this drum was built, mention or illustrate anything of this nature. So what was the purpose of this mysterious wooden pinwheel? Was this somehow intended to affect the sonic qualities of the drum? Was this a one-off experimental prototype or a standard production model? Is this possibly a feature borrowed from banjo construction that Stromberg was attempting to implement on drums? It is, in the end, a drum which presents more questions than answers.

Do you have a drum made by Charles A. Stromberg? I want to hear from you! Feel free to drop Lee an email anytime at lee@vinson.net. And for more on the early 20th century snare drum makers of Boston, Massachusetts, please visit BostonDrumBuilders.com.