The latest arrival into the collection is another early Master-Model Drum by Boston's George B. Stone & Son This one is finished in the commonly seen black lacquer with nickel plated hardware. As is consistent with other Master-Models from the first two years of production, the drum features a rosewood grommet, Stromberg butt plate and cylindrical tensioning nuts. 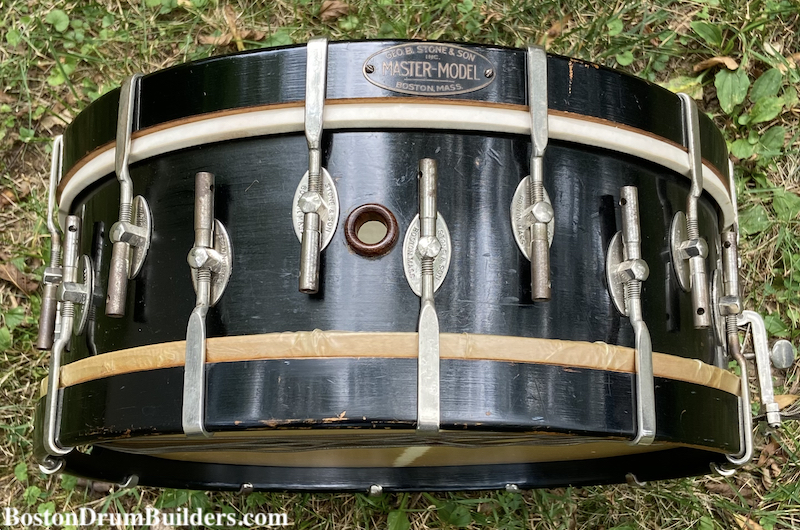 Inside the drum is a Stone & Son label dated December 31, 1923 as well as a second label reading "Hammond & Gerlach / Drum Specialists / Largest Drum School in Pennsylvania / Expert Drum and Banjo Repairing / Telephone Atlantic 3887 / 624 Penn Avenue, Pittsburgh, PA." W. F. "Bill" Hammond was a renowned performer and teacher in his day. Malcolm M. "Heine" Gerlach was a four time National Champion Drummer of the American Legion Contest, a former member of Pittsburgh's Grand Theater orchestra, and a member of the Pittsburgh Symphony Orchestra. Both Hammond and Gerlach came to know George Lawrence Stone through their involvement in the American Legion competition circuit. The three men were among the thirteen charter members of the National Association of Rudimental Drummers founded at the 1933 American Legion National Convention in Chicago. This personal connection between Stone, Gerlach and Hammond helps explain how a drum shop in Pittsburgh became a dealer for Geo. B. Stone & Son whose sales were mostly localized to New England. Do you have a George B. Stone & Son Master-Model drum? I would love to hear about it! Drop me a note at lee@vinson.net. And for more on Boston's early 20th century drum makers, please visit BostonDrumBuilders.com.